The European Commission wishes to prepare Europe for a digital future in the coming years. In that context, she has set out multiple goals, among which there is connectivity. Fibre plays an important part in this. In order to be able to achieve these goals, different legislative and other initiatives have been launched, which are briefly discussed on this page.

The European Commission has set goals for connectivity in Europe. According to the European Gigabit Society ambitions, the following has to be achieved more in particular by 2025:

An important European guideline is the European Electronic Communications Code, which was promulgated at the end of 2018 and has to be transposed by all European Member States into their own legislation. Belgium should complete its transposal by the end of 2021. The European Code encourages the roll-out of very high capacity networks (VHCN) through different provisions.

What is a very high capacity network (VHCN)?

Fibre to the distribution point is explained further (recital 13) as: 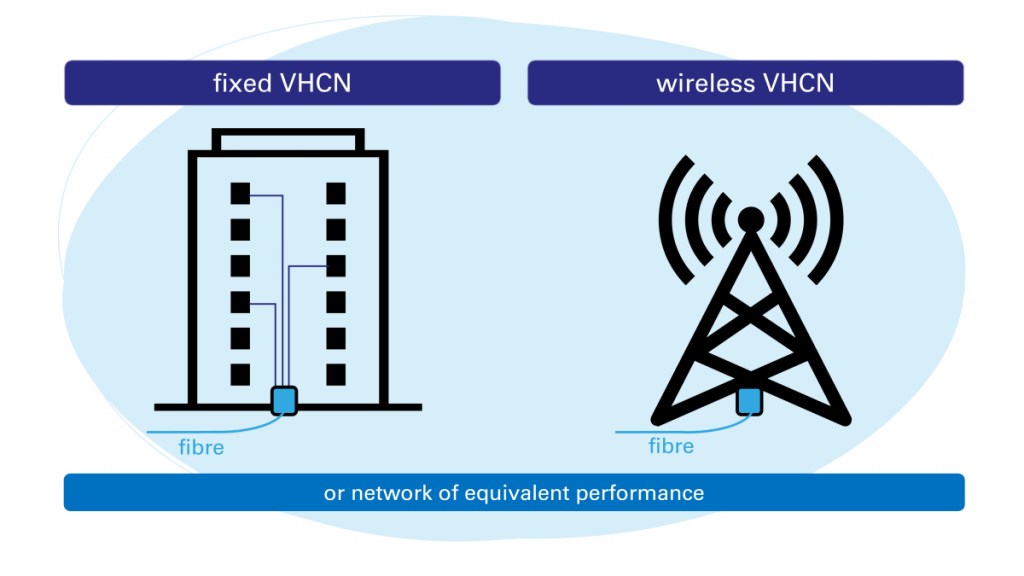 In other words, as regards the fixed networks, all networks consisting of fibre elements (at least) up to the apartment building are VHCNs. The other networks that are based on different technologies for the larger part, are VHCN provided they meet a list of criteria.

BEREC (the European assembly of telecom regulators) has set out these criteria in its guidelines BEREC Guidelines on Very High Capacity Networks. Among the criteria there are:

A cable or coax network may, depending on the protocol used, for instance meet these criteria as well.

Measures in the European Code to promote VHCN roll-out

For networks meeting this definition the European Code suggests a number of concrete measures that should promote their roll-out.

The typical regulatory model in which a country’s telecom regulator determines whether there is a dominant operator for a certain market and consequently imposes a number of obligations (such as granting other operators access to his network), is made more flexible in the European Code to encourage VHCN roll-out.

Other measures to lower the roll-out costs are for instance:

Other European initiatives related to the roll-out of telecom networks

There are different other European instruments or initiatives aiming to accelerate high-speed connectivity roll-out (among which there is fibre). Below a brief overview is given of the main instruments and initiatives. More information and other initiatives can be found on the website of the European Commission: